While my friend, Tim, was mentoring me on the front suspension, he commented on the exhaust leak I had. He found some loose bolts on the exhaust manifold and tightened them, but the leak remained. He suggested I buy a header from someone he knew. Not being one to ignore good advice, I bought the coated headers at a cut-rate price from a great Z car guy. While I already purchased a set of 4-screw SU carburetors from my friend, Pete, on a lark I bought another intake and linkage advertized on Zcar.com.

Tim came over to my house a couple of months later to help me make sure I had everything I needed to proceed. All I was lacking was a pair of intake/exhaust manifold gaskets. It’s good to double them up to get a good seal when using headers. The good news was that the extra intake I purchased was an N36 intake. Apparently it had pretty good flow characteristics.

So, it came time to tear everything down. I started by removing the air cleaner and the old flat-top carburetors. This is a fairly easy process, using 12mm & 14mm open ended wrenches (a 12mm stubby wrench is handy, too) and a 12mm socket. Once I removed the carburetors, I found the exhaust leak. 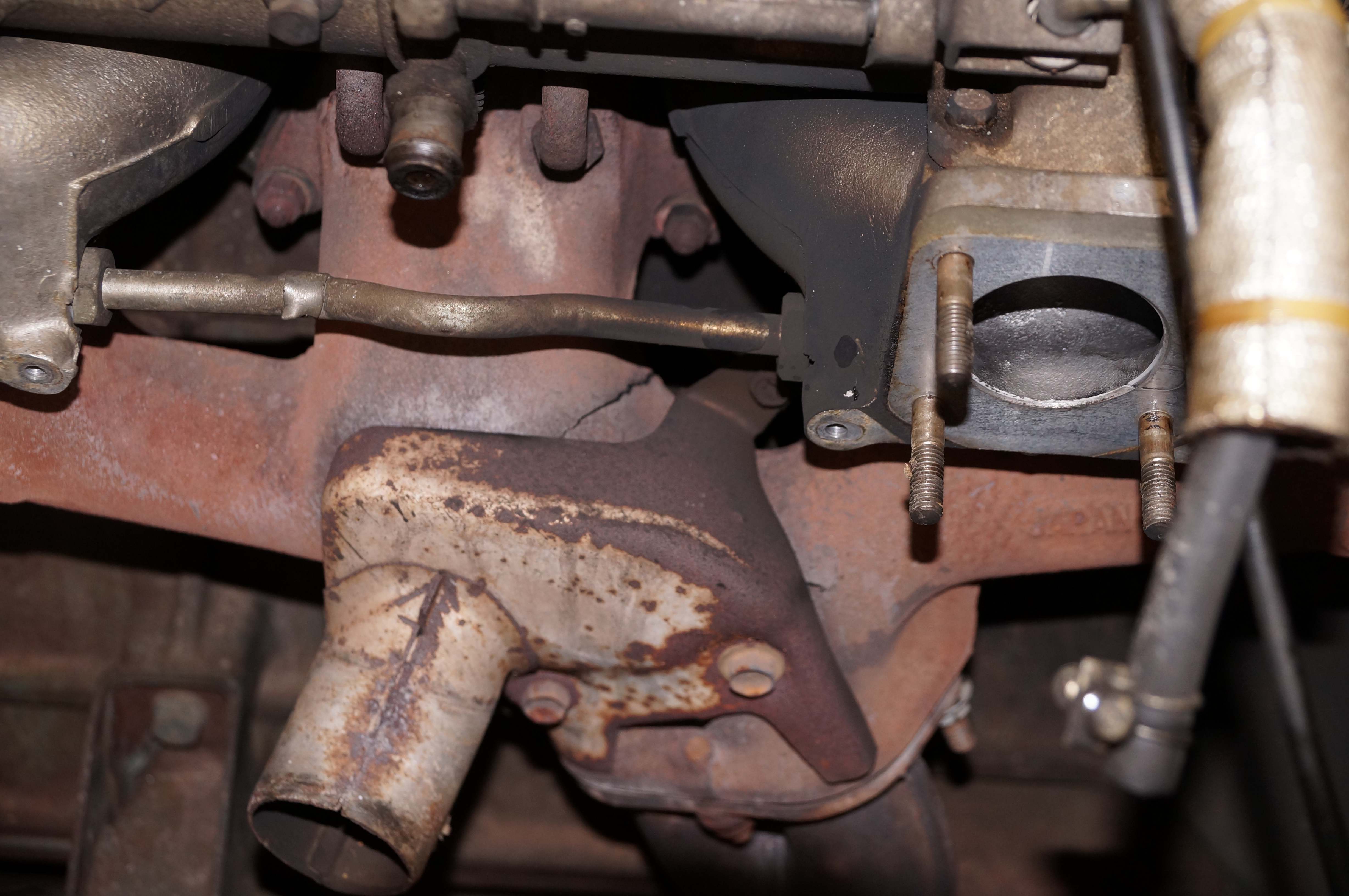 That crack is just behind cylinder number 4. After all was said and done, I removed the heat riser from the exhaust manifold to see the extent of the damage. It was bad. 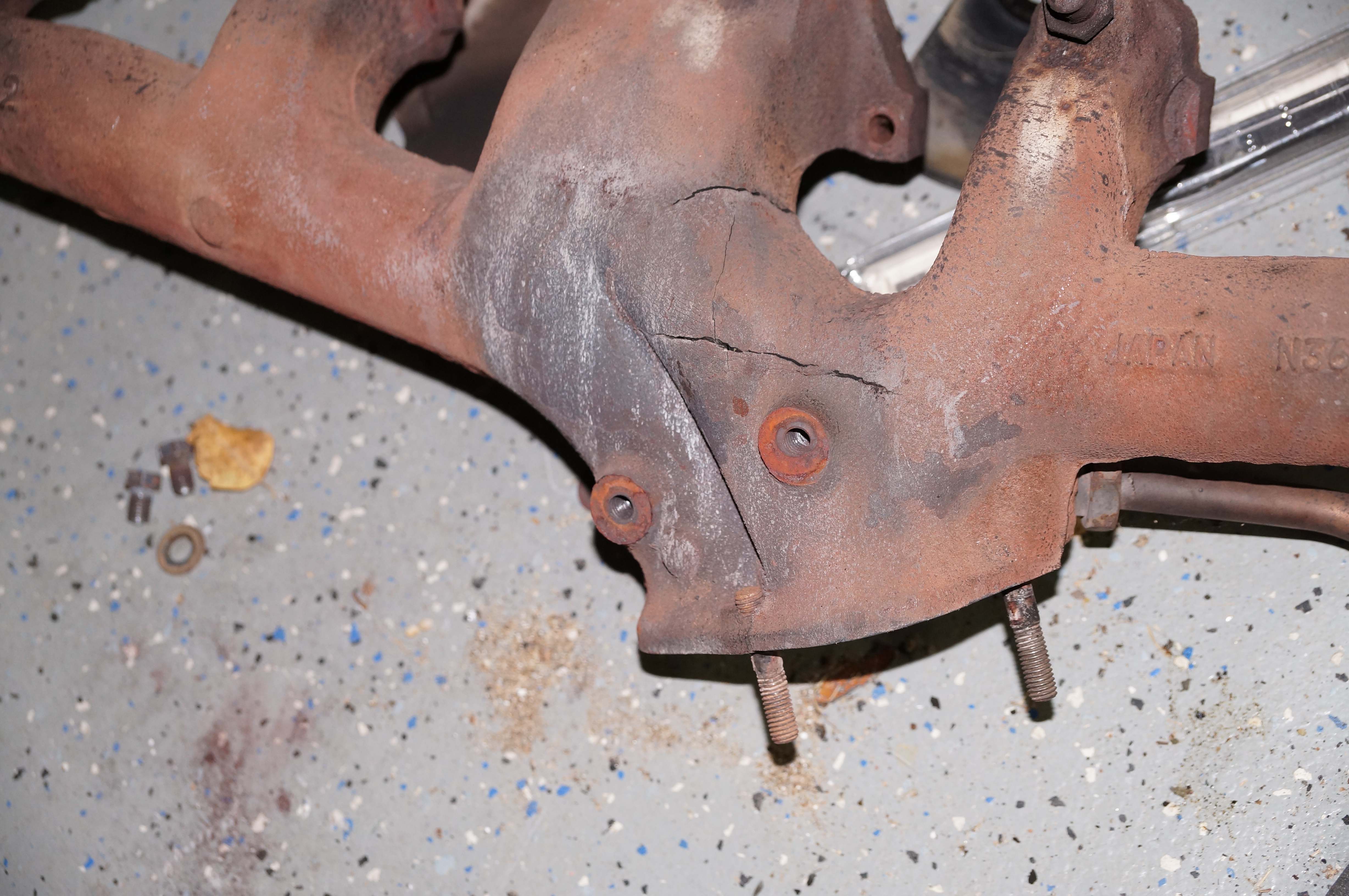 Following the removal of the carburetors, I removed the balance tube and intake. Noticing that the intake on the car was also an N36, I decided that I would try to clean it up and put the other N36 on my 240Z at a later date. I also found that the vacuum line from the intake to the brake check valve was rotting badly. I opted to replace it with a braided line from Motorsport Auto. The nuts and bolts came off from the exhaust manifold rather easily with no broken studs, probably because years before, Eddie Radatz worked on the intake and exhaust. That would make re-assembly a walk in the park. Even with the bolts out, it took quite an effort to separate the exhaust manifold from the Y-pipe on the exhaust. I resorted to using a pry bar to loosen the bonds. Finally, the exhaust was out of the car. 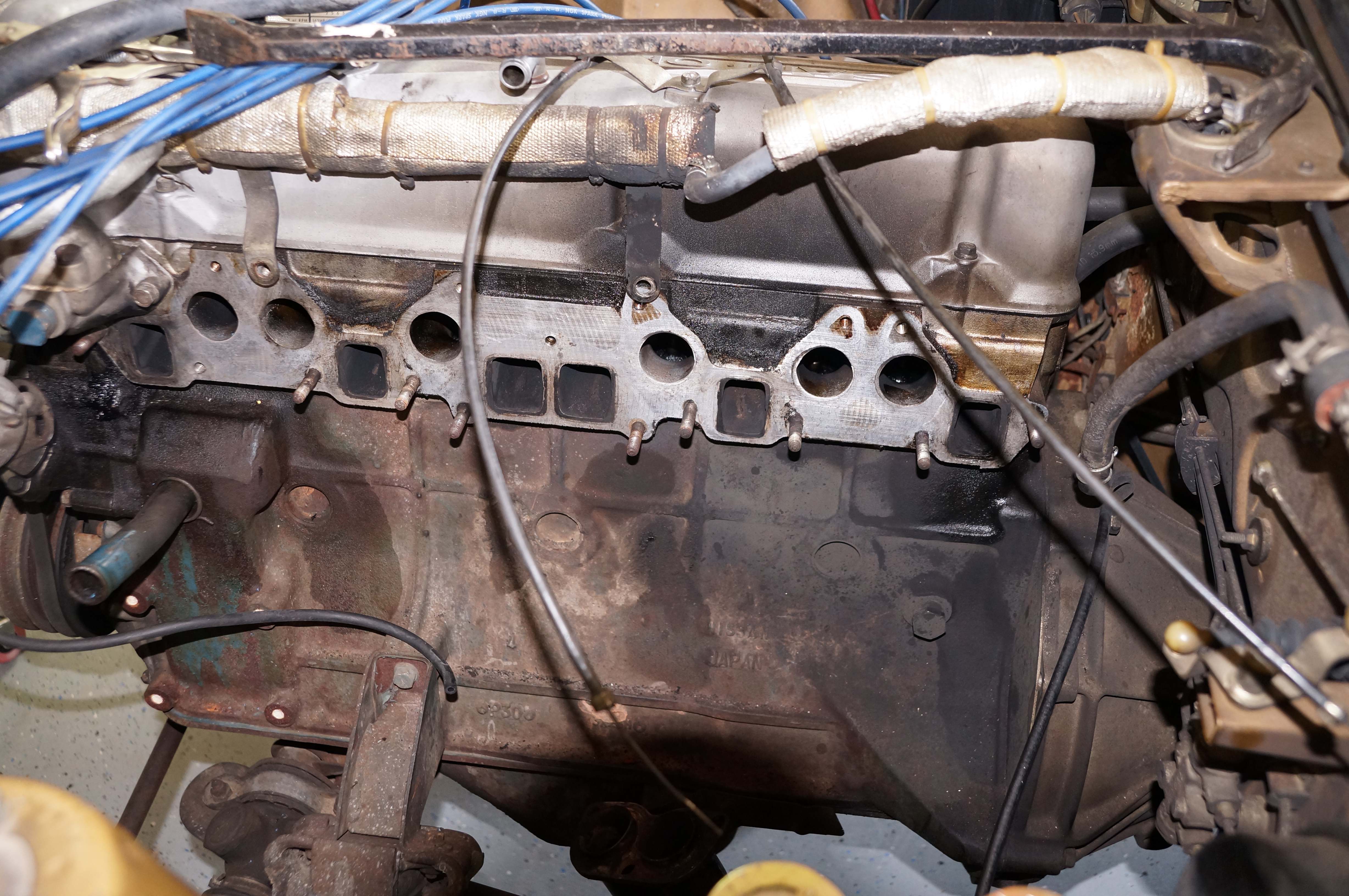 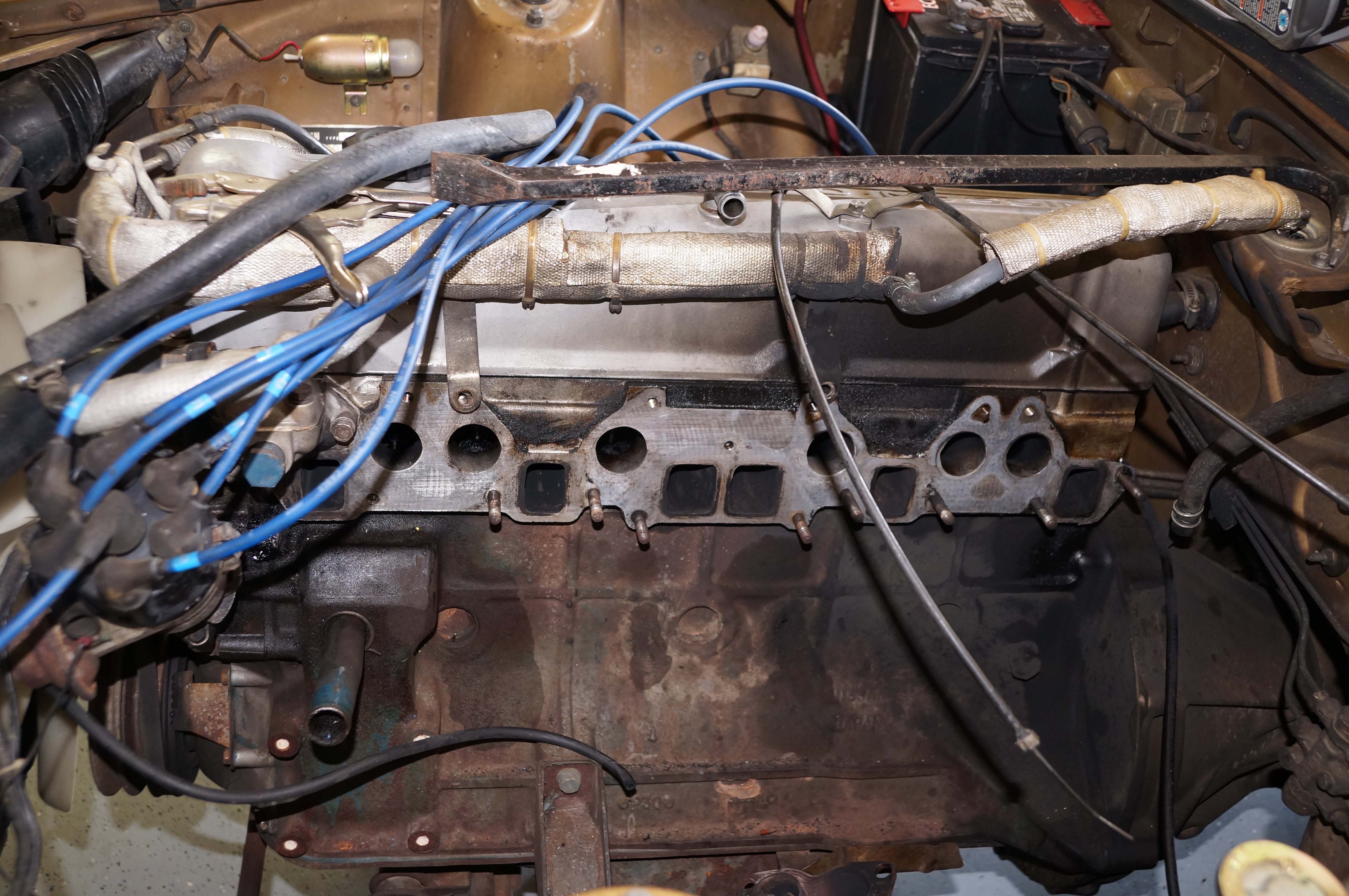 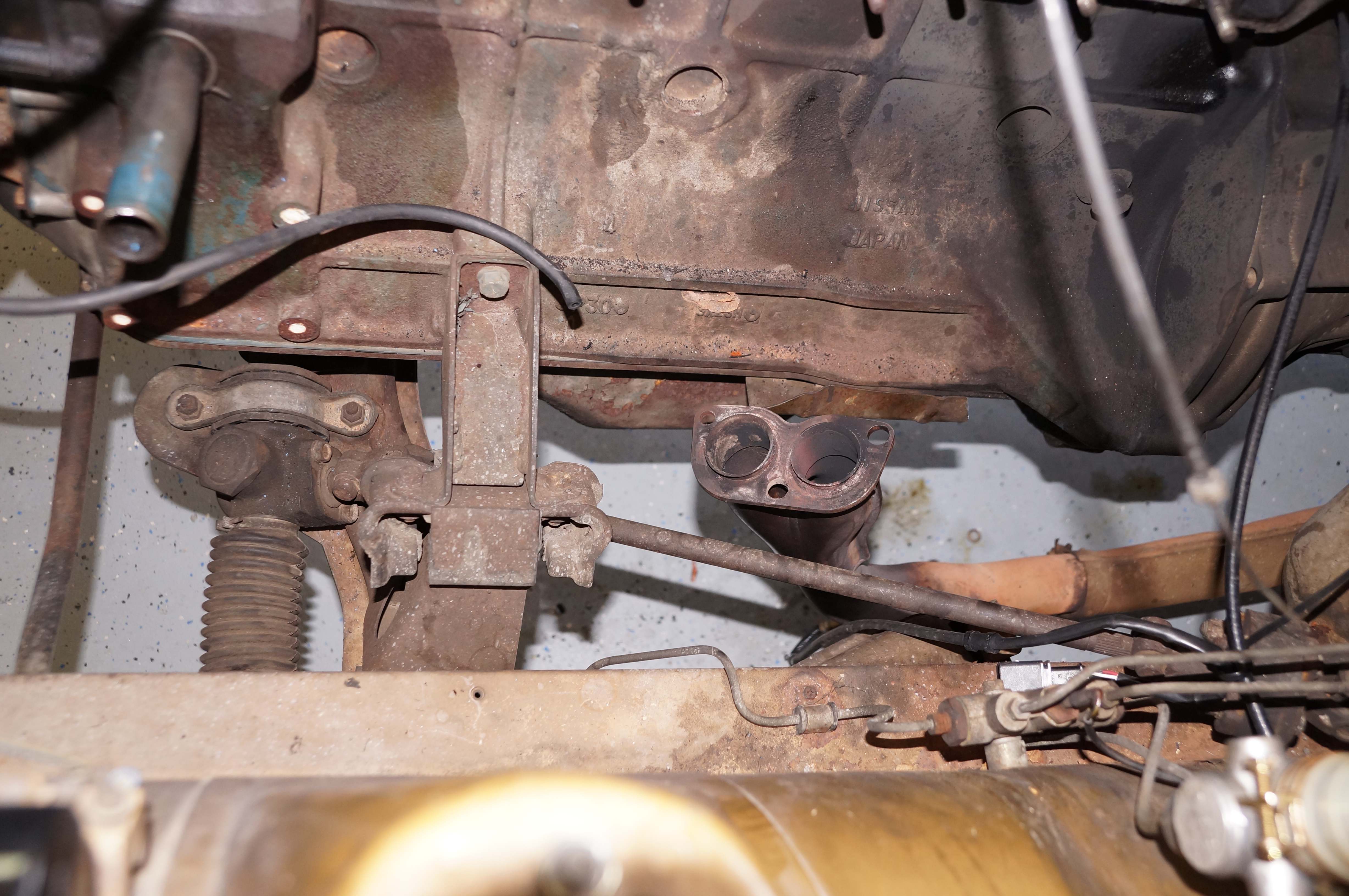 With a week between removing the intake & exhaust and installing the headers & intake, I decided to clean up the N36 intake off the car. 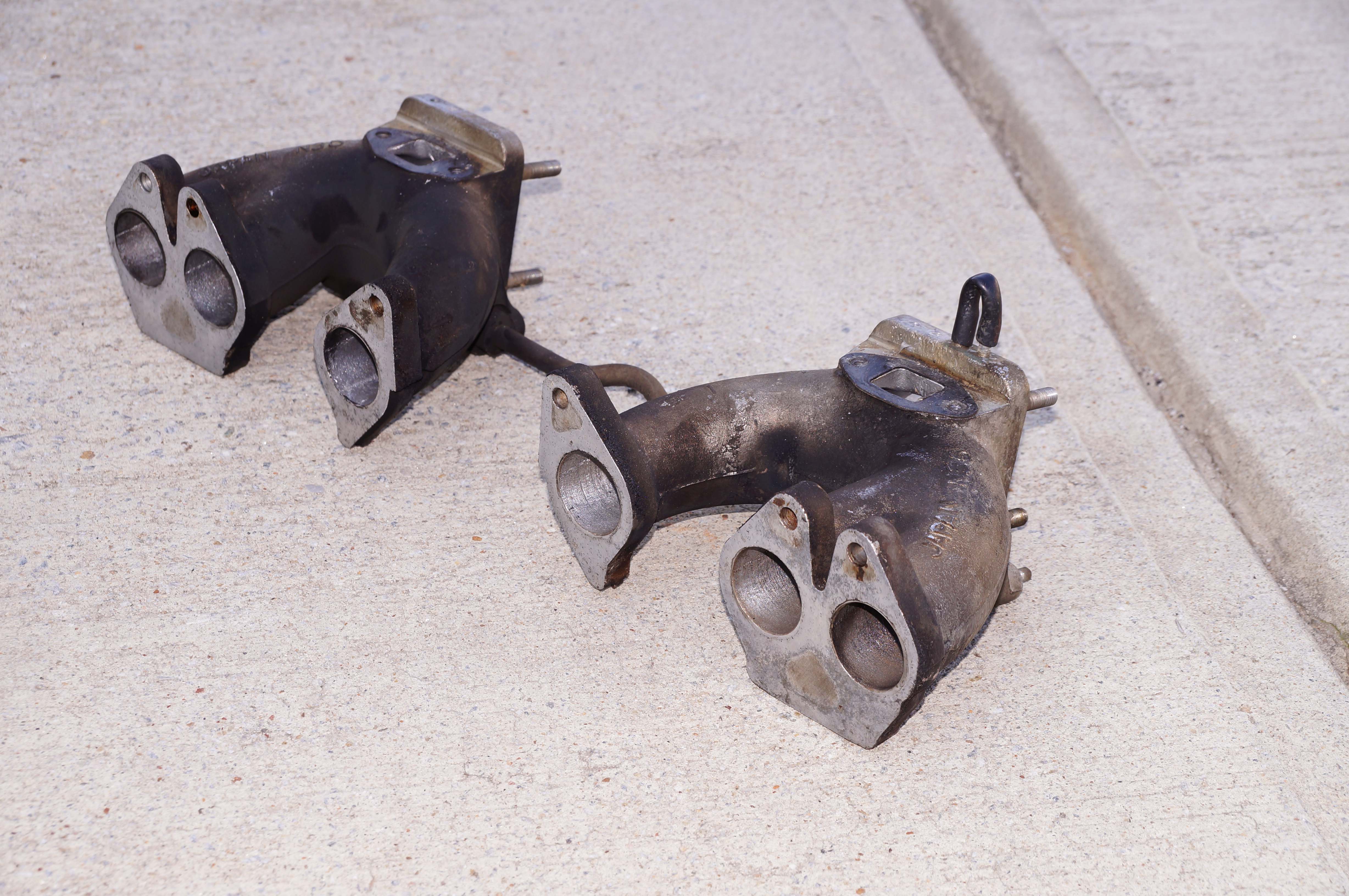 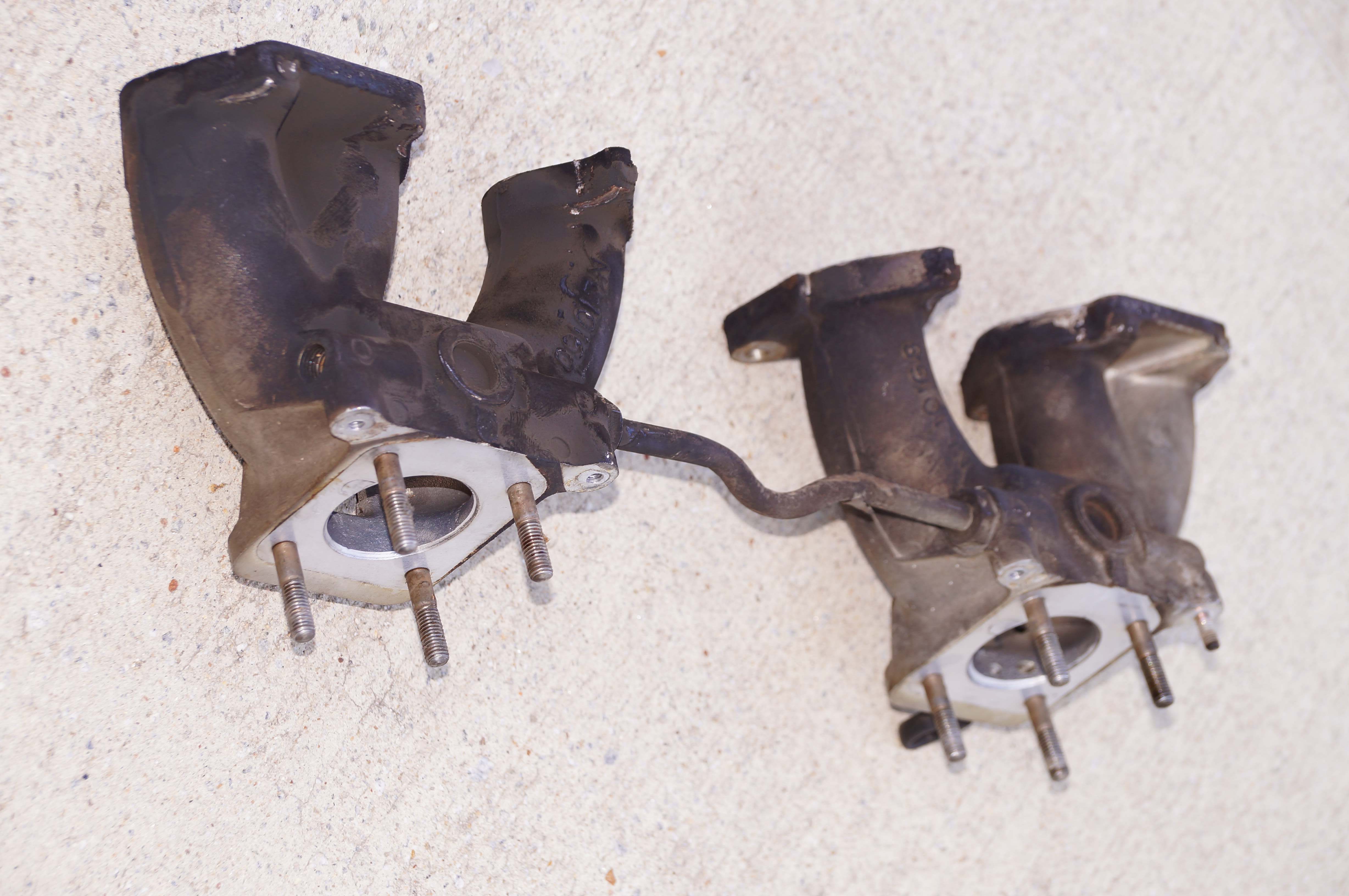 I hit the intake with Purple Power and scrubbed with a brush. I rinsed with water and denatured alcohol (to help remove the water). Then I went at it again with brake cleaner and a brush. I tried soda blasting the intake, but there was still too much grease. I tried again with the brake cleaner and a brass brush. I scraped off heavier grease deposits with a razor scraper and picks followed by some more brake cleaner. Then I used the soda blaster to remove dirt left behind. 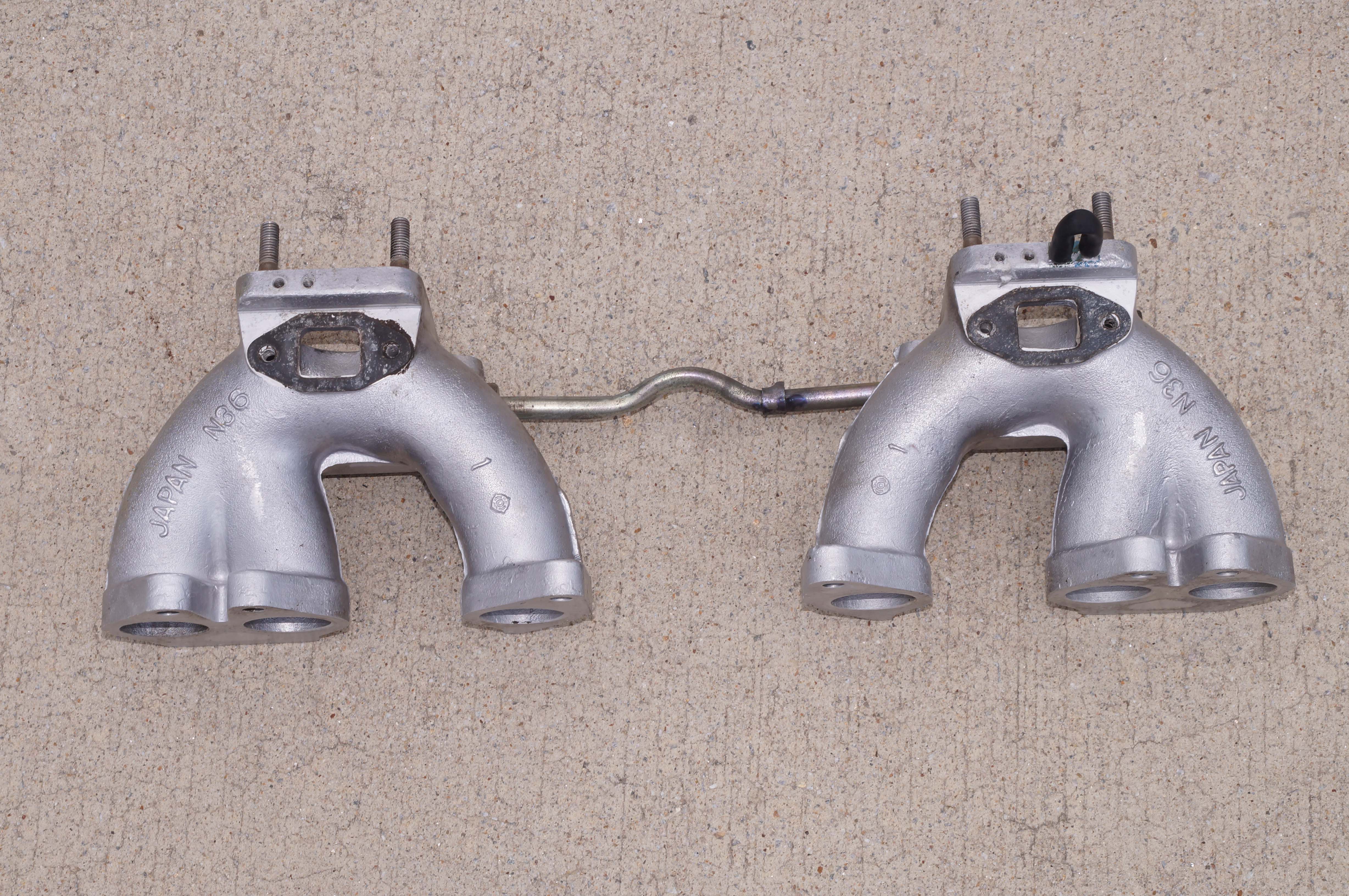 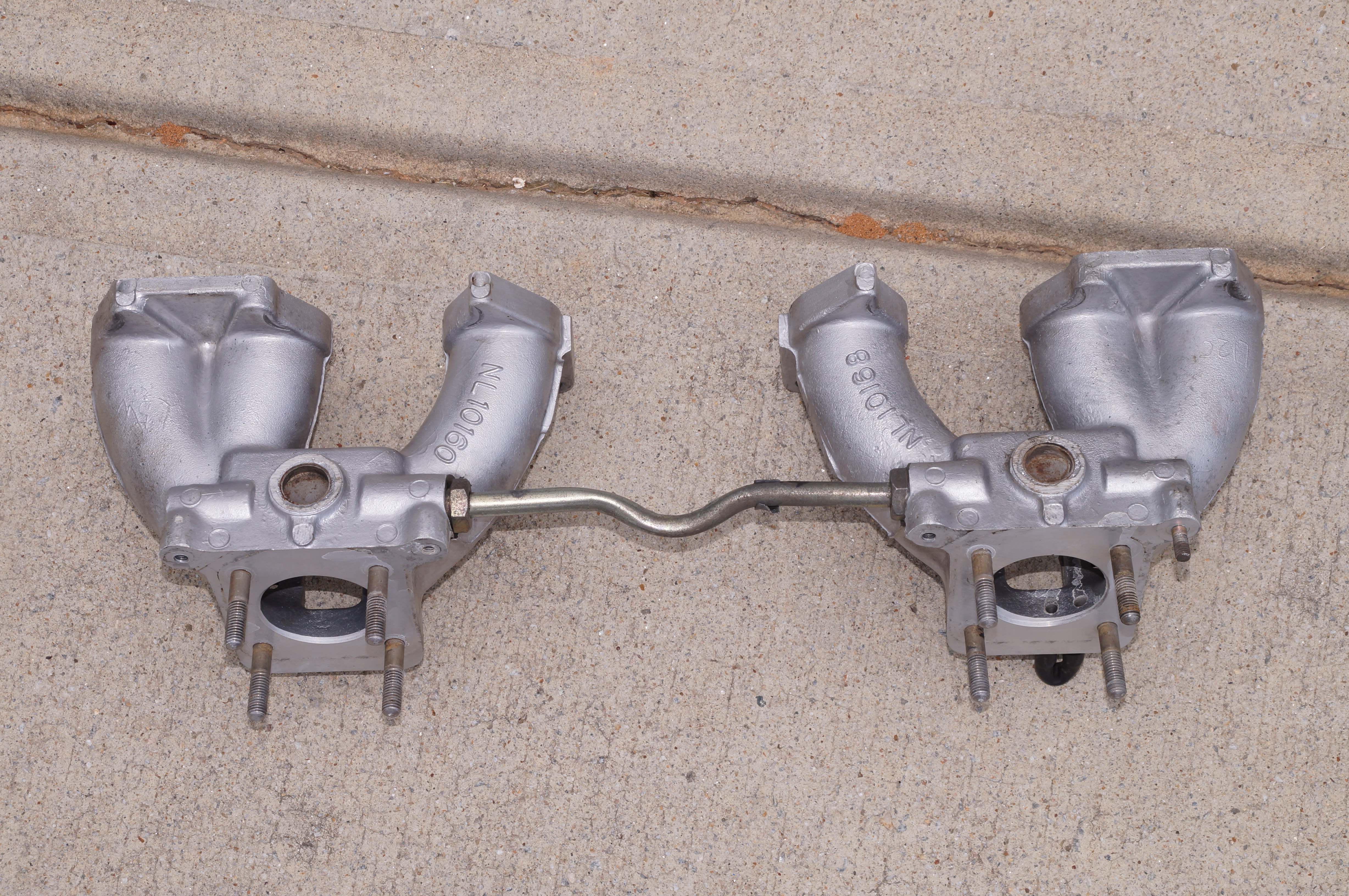 I tried the same with the balance tube, but the results weren’t as sharp. 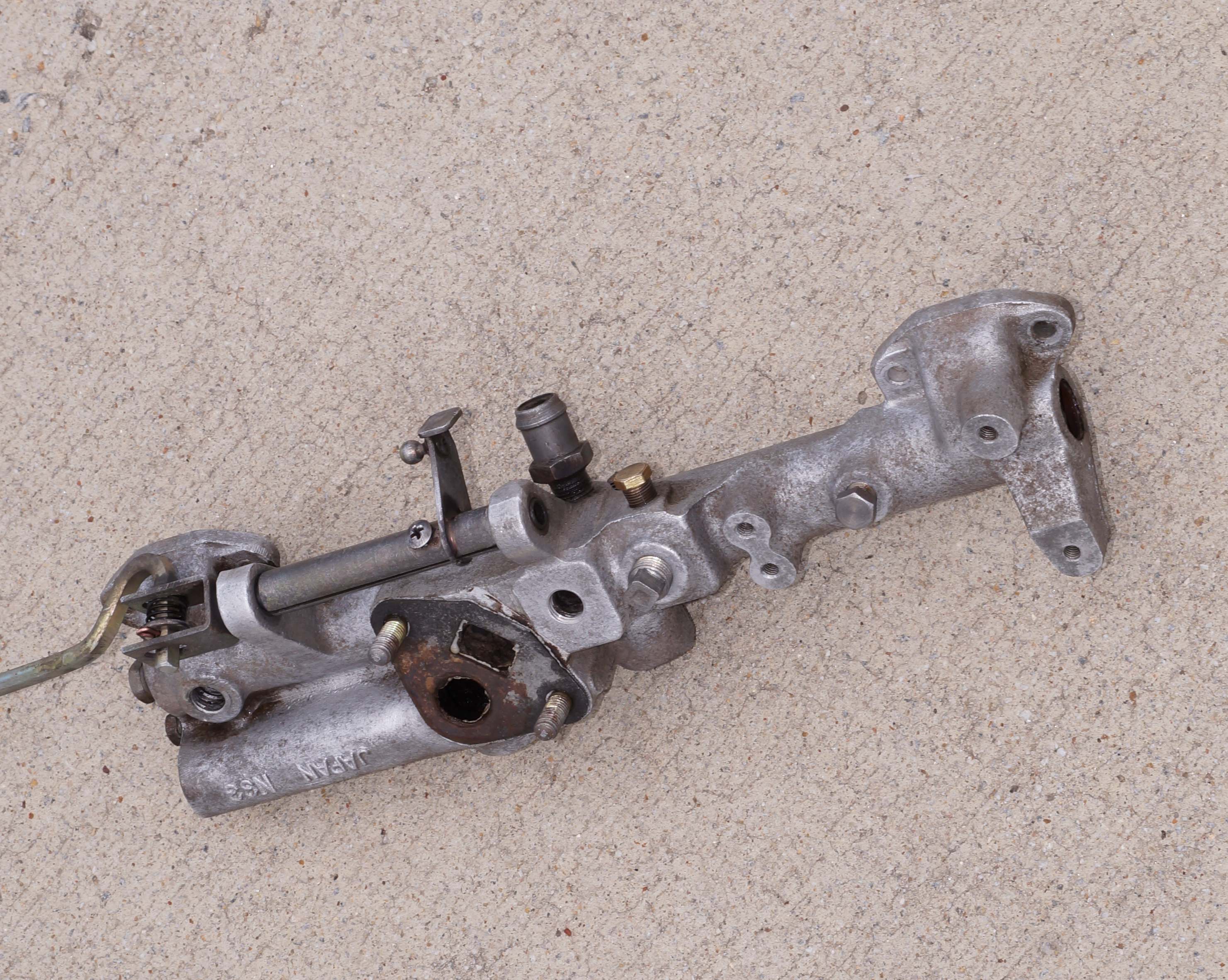 I attacked the balance tube again with wire brushes, first on a drill and then with a Dremel tool, and I got the results I wanted. I put the intake together in preparation for Tim’s help on the next weekend. 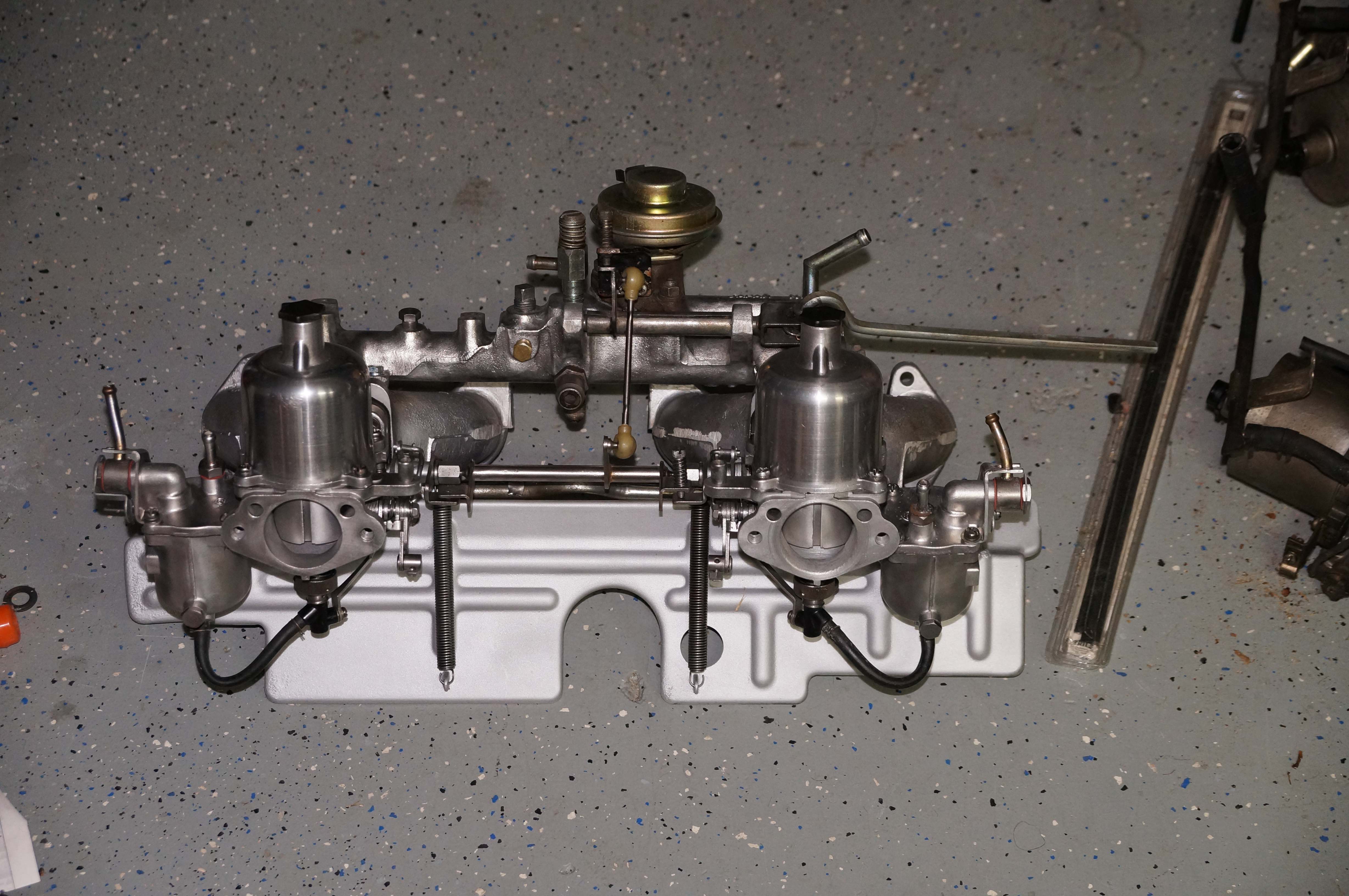 Leading up to the install, my wonderful wife took my spare air cleaner to ProCryo. They did a really nice job on the splash pan for the 260Z, and they didn’t disappoint. 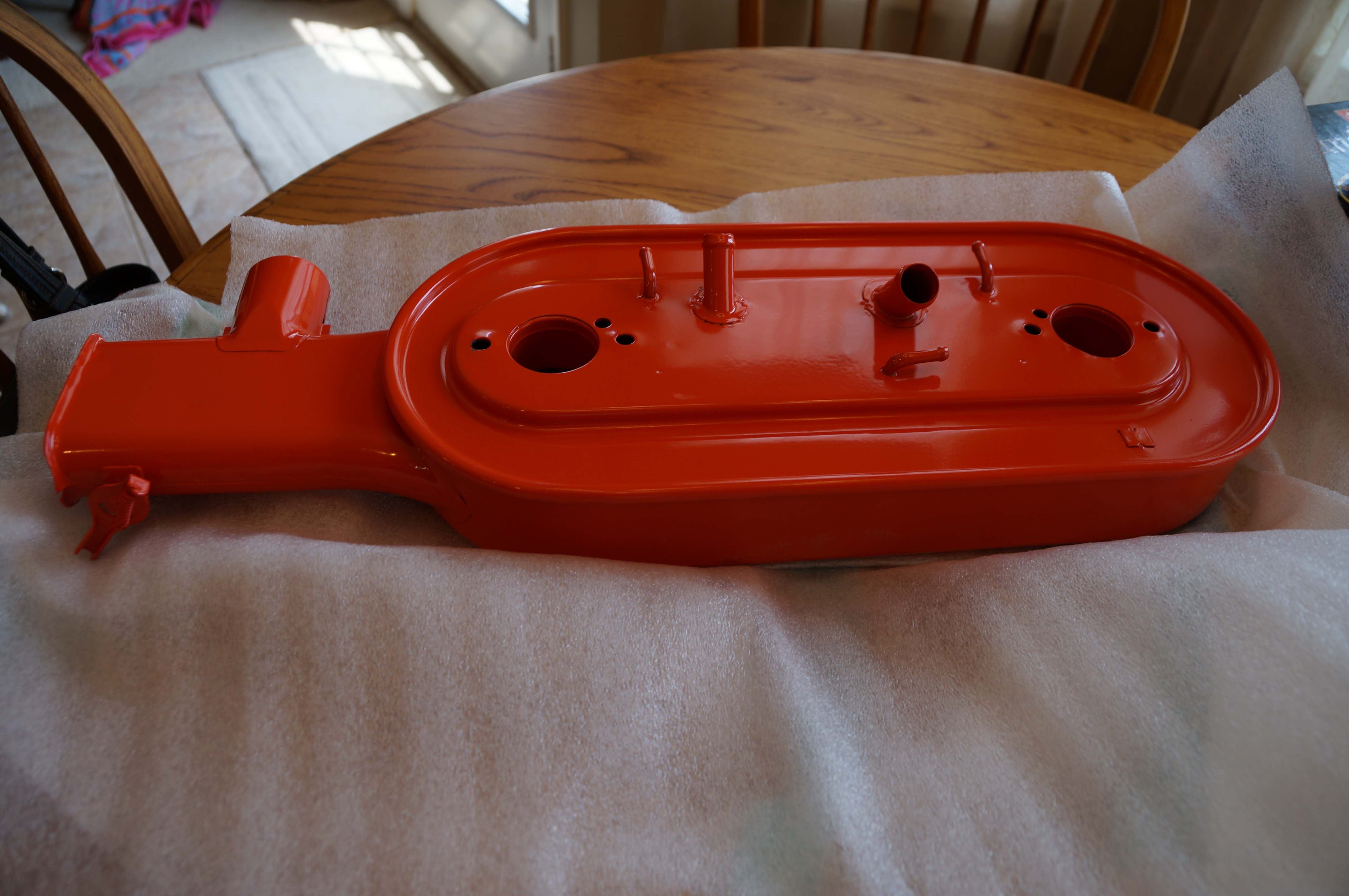 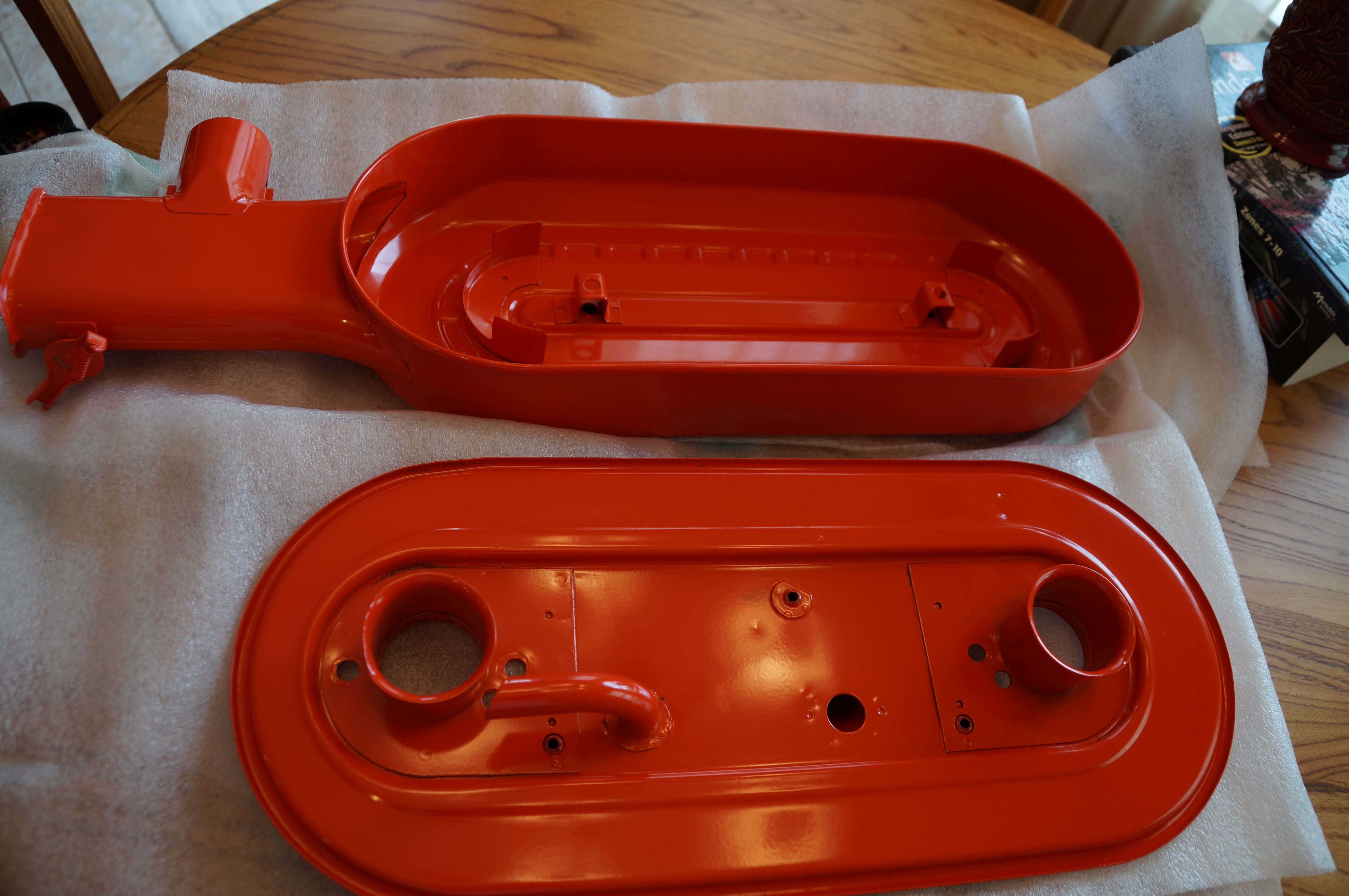 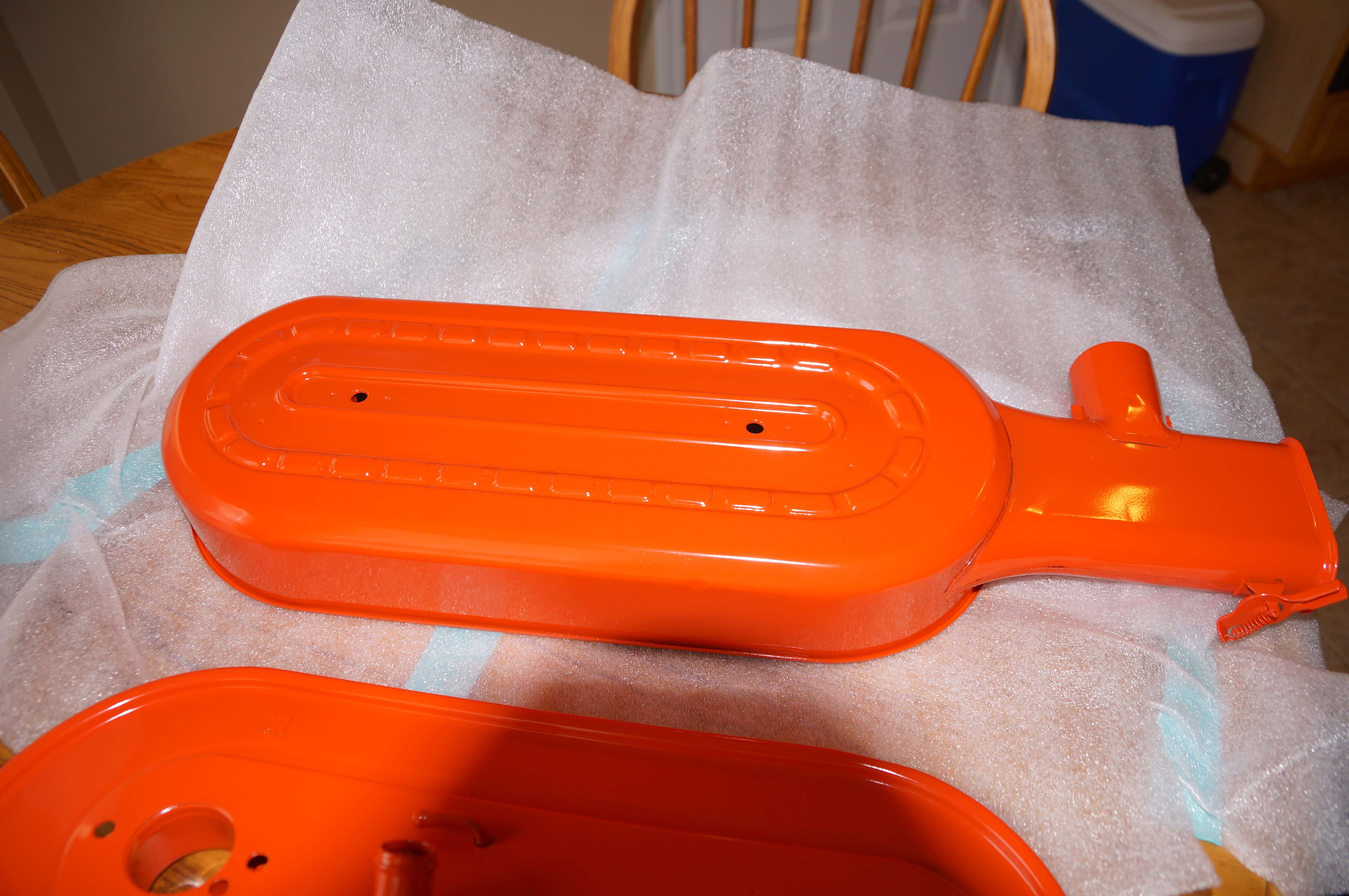 I have some nitrile O-ring cord ordered from Jegs and some buna-n foam insulation ordered from McMaster Carr to replace the gaskets removed during the cleaning & powdercoating.
I also sized up fitting in the header, glued the manifold gaskets together and put the gaskets in place. When looking at the routing of the header, I confirmed that I would need to cut back the old exhaust pipe. I tried using a reciprocating saw with a metal cutting blade, but it bounced off the pipe, probably because the pipe could move around easily. I dug out my oscillating multi-tool and cutting blades, and tried that. Holding the pipe with one hand, I could steady it enough to get the blade to bite. Eventually, I had a nice cut through the pipe, though it took a couple of blades.

Tim arrived later that day to do the install. We had to cut back some more exhaust pipe, using up a couple of more blades in the process. He fit the header down into place. Since the car was on ramps, the back end of the header was hanging low. Tim used a floor jack I had handy to lift up the back end of the header, aligning the header to the studs in the head.
After some trial and error with a couple of finicky bolts, the intake and headers were in place. By the way, the bolts between the two intakes are the trickiest. They are easy to remove when the carburetors are off, but they are difficult to reach when the carbs are on. Then the fun began.

We go the engine to fire up, but the back carburetor was the only one supplying fuel. Tim checked the float bowl. It was fine. He checked the needles. The front needle was fine. The rear needle was bent. (It isn’t difficult to check to see if a needle is bent. Roll it on a flat surface. A bent needle will have a wobble as it rolls.) I scavenged a needle from the rear carburetor on the 73 only to find it was bent. We took to tearing apart some of the flat tops lying around in the garage until we found a straight needle. However, it was slightly larger than the round top needle. Tim said to use it anyway. The front was still doing nothing. We stepped away to have lunch. When we returned, we drained the float bowl on the front carburetor, and Tim used compressed air to blow out the line from the carburetor to the bowl. We buttoned up the front carb and tried again. Finally it was supplying fuel. Tim observed a sticky linkage, but otherwise it was running fine.

I borrowed the air cleaner from the 73 and did a test run. The uncorked exhaust was loud, but the car ran fine. A few days later I got a 2.5 inch exhaust and Magnaflow muffler installed by Sooner Automotive. This weekend I took wire brushes to the valve cover to remove the soot from the exhaust and to brighten it up some. I also replace the needles with some SM needles from Z Therapy. 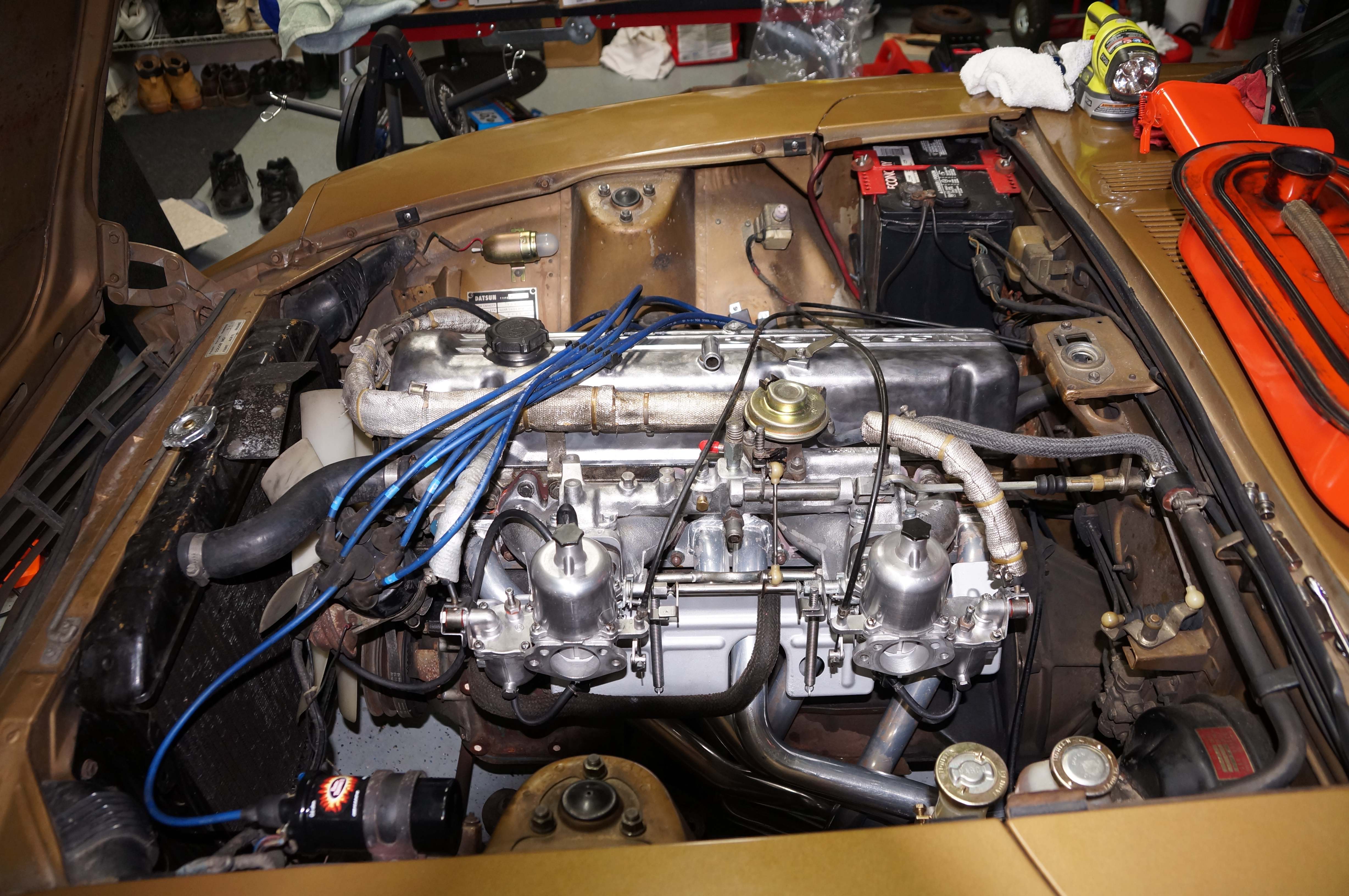 All that is left is to finish the air cleaner.

3 Responses to Intake and Exhaust